As a young man I lusted after the high performance, sleek lines and devil-may-care appeal of a Porsche 911 cabriolet. I still do, even as I realize that my fantasy may never be realized. Now, to be honest, I've never driven a Porsche. But there was a local Porsche dealer where I grew up in Palo Alto and I used to bicycle past it every day as a teenager on my way to the muni golf course. That's where I spent all my time as an employee and golf addict. I was always hot for the Porsche ragtop, even as a callow golf nerd in plaid pants and poly polo shirt.

The closest I came to owning a Porsche was the time, in my twenties, when a millionaire divorcé took me to that very same dealer and offered me one, hoping to permanently ensare my youthful vigor in her amorous web of riches. Strange as it may seem, I was a desirable young thing when I had hair. Despite the beautiful matron's generous offer, I fled. True story brah.

The highest performance car I ever owned was a BMW station wagon, which I lovingly ordered and picked-up from the factory in Munich. It seems like a very long time ago that I enjoyed such heady consumer indulgences. That German junket was a business consulting trip during which I gave a talk on the wonders of online publishing to a fascinated throng of Teutons. Following my lucid presentation, a beautiful German maiden approached me and my Biaritz Blue BMW (it was a looker) and said, right to my face, "I'm so hot for the Internet!" I took that personally, but fled again. Sad thing is, that BMW eventually ended up in a swimming pool on Adelaida Road, after which I dubbed my son an honorary captain in the Bavarian Navy. That's another true story. I'd like to tell you that one in detail, but I digress. 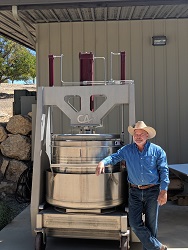 After the BMW in the pool fiasco I realized that I needed a more practical conveyance to fit my new ranching lifestyle so I spent the insurance money on a diesel pickup truck, whose battered remains I own to this day. I still held out hope for the Porsche, but as we slid further down the slippery slope of the wine business, it became clear that we couldn't borrow or rent other people's winery equipment forever. I thought we were doing great when we bought a set of used equipment for about $25,000, Problem is, it was lacking a wine press and all wines need to be pressed off their skins prior to barreling--unless one is making "free run" wine for sissies. Despite my desperate search for a used wine press on the cheap, there was none to be found, so I took the plunge on a new press for about $50,000 in borrowed money. About this time I was at my daughter's soccer game, drooling over a gleaming white Porsche cabrio in the parking lot when its owner walked up with a satisfied smirk on his face. I asked him, "What did this baby set you back?" He told me he got a killer deal on it, slighty used, for about $50,000. I flinched and walked away. Right then I knew, there would always be some other practical wine making object (not to mention tractors) that would come before my hedonistic dreams of the open road in the Porsche. So I named our wine press, a hulking chunk of stainless steel and hydraulic power,  the "Porsche Convertible" of winemaking. Apparently you can't always get what you want, but you can, sometimes, end up with a wonderful wife and everything you need to make beautiful wines. And with your help, we'll hopefully we'll sell enough wine to conserve our beautiful ranch for posterity.