We just released our 2011 Limestone Reserve Cabernet and 2011 Watershed. These wines, bottled last August, are still just babies, but are already drinking nicely. 2011 was a very cool and wet year that pushed our Cabernet harvest into early November. The long “hang time” produced mellow tanins with moderate alcohols and nicely resolved fruitiness. Get one of each during February for the special price of just $72 (list price $80). There is no limit on quantity and your wine or beef club discounts apply, of course. Valid during February only. Now is the time to get a jump start on these perennial favorites, which are sure to become more integrated and expressive with age. We have traditionally sold out of the Limestone and Watershed every year; why not give the gift of great, rare wine on Valentine’s Day? Shop here.

Wintertime finds us reaching for our Rhone wines, when cooler cellar temps promote a certain liveliness and heightened perception of acidity in our Syrah-dominated wines. These wines are a wonderful accompaniment to heartier winter meals like stews and roasts. In honor of winter (and hoping we have a LOT more winter), we’re offering a 3-pack of Rangeland Rhones for just $75 (retail $96). This special includes our 2010 Syrah/Mourvedre, 2011 Syrah, and 2011 GSM. Club discounts apply, as always. Shop here.

We were thrilled when our 2010 Watershed won a gold medal and Best of Class with a score of 94 points in the limited production category for Bordeaux Blends at the Los Angeles International Wine & Spirits Awards. Justin Vineyards won Best of Class in the same category for larger wineries with their 2010 Isosceles, a wine which includes a significant fraction of grapes from our Adelaida Springs Ranch estate vineyard. A win-win!

Both our 2011 Watershed and 2011 Limestone Reserve also received 90 points from Stephen Tanzer’s International Wine Cellar report. In addition, he gave our 2011 Mistletoe and 2011 Petite Sirah 90 points, and our 2011 Cabernet Sauvignon an 89. We are encouraged that our wines, which are not typical of Paso Robles' “big fruit” style, are gaining visibility and prestige in the world of wine. Congratulations to our young Winemaker Shannon Gustafson, who embraces our “field crafted” mission to deliver wines of consistently stunning purity and terroir.

If you haven’t tried our succulent, grass-fed ground beef, you’re in for a treat. We still have some ground beef available from 2013, frozen fresh in 1lb. vacuum packages. We sell the ground beef in 10 lb. ($75) and 20 lb. ($130) boxes. The meat is packed in convenient 1lb. packages that fit easily in most freezers. Your wine and beef club discounts apply, and we can either ship to you in CA or you can pick up your beef at J&R Meats in Paso Robles or here at the ranch by appointment. Shop here.

For the more adventurous cooks, we have 10 lb. boxes of beef organ meats, which include beef heart, a whole tongue, kidney, and 1 pound packages of sliced liver. The meat is frozen and vacuum packed, and available for pick up in Paso Robles or can be shipped anywhere in California. Shop here.

We’ve kept our prices level since starting our beef business in 2010, which are well below market prices for grass-fed beef. We are under pressure from rising costs so, beginning with our June beef harvest, our prices will increase from $8/lb. to $9/lb. Our beef club box, currently $200 before club discounts, will increase to $225.

Our ranch gates will open for tasting Friday March 14 through Sunday the 16th, 11 to 5, for this year’s Zin festival, which is titled: Vintage Paso: Zinfandel and Other Wild Wines. Saturday and Sunday, join us for lunch as we will serve a tasty selection of our estate grown grass-fed beef and lamb sliders.

Our second annual Field Day is scheduled for Saturday, April 26. If we don’t get any rain to freshen up our pastures with green growth, however, the event will be moved to the house. You’ll have an opportunity to pick up your wine club early, enjoy some grilled beef and lamb sliders, hear some music, and pick up your lamb share as well.

As many of you know, we are in the grip of an historic drought. If drought conditions continue, it will affect our ability to raise livestock naturally here on the ranch. Our wine grape crop, which fell short last year by 25%, could be substantially reduced as well. We will keep you informed about any change in availability of our meats as the situation unfolds. For more thought provoking commentary on droughts and natural forces, see Laird’s blog. 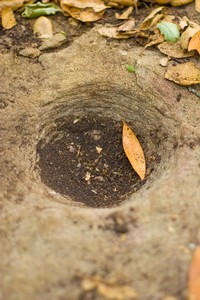 We usually have new green grass covering the ranch by Christmas time, with livestock and wildlife nibbling hungrily the new growth. 2014 has arrived without freshness or seasonal relief. The ranch is dry and all but barren of fodder. We are feeding hay to our cattle daily for the first time, which is an expensive and anxious pastime. Our once-independent beeves now crowd any white pickup truck they see, raising a cloud of  dust and bellowing for their daily meal.

As many of you know, Central California, from Los Angeles to San Francisco, is in the grip of an historic drought. 2013 was the driest year on record, going back to 1849 in San Francisco.  At least one scientist believes this is the driest year since 1580. The city of Paso Robles received just 1.9 inches of rain for the calendar year. Here at rain-favored Adelaida Springs Ranch, much higher and closer to the coast, we received only 4.33 inches of precipitation. Both totals are just 15% of the average annual rainfall.

Something about living through an historic event like this makes me feel connected to the past: taut threads vibrating with familiar patterns of nature, love, pain and achievement. Such ruminations also trigger visions of an uncertain, but probably familiar future, in which we strive and struggle with natural forces.

Since I could first read,  I have been interested in tales and patterns of history. The first newspaper headline I remember seeing announced the death of Winston Churchill, as I carried the daily paper through our front hallway to my parents in January of 1965. I thought his famous, heroic round face looked so familiar. In truth, my historical interest started before I could read. As a small boy in Nova Scotia, I listened to adults discuss people and times past. They told stories of pioneers, architects, pianists, shopkeepers, of charming losers and unpublished poets. They told stories of great wars and gutted steel ships towed into harbor, of walks down country lanes and hunting in birch bark canoes.

Twenty years later,  I was watching Palo Alto transform itself from a sleepy college town into the brain of Silicon Valley. I studied history at U.C. Santa Barbara, 1977 to 1981, during which time I never heard of a personal computer. Then I spent the next ten years publishing magazines about software development for PCs. I think they call that a paradigm shift.  History was unfolding at an accelerated pace all around me, from transistors to integrated circuits in the 1960s, large computers to microprocessors in the 1970s, isolated personal computers to the all-connected internet in the '90s. I was a very small player, but I met the Bill Gates’ and Steve Jobs’ and many more who were envisioning, inventing and selling the future.

In the 1990s I published investment newsletters on the newly commercial Internet and rode the dotcom wave to ownership of Adelaida Springs Ranch in 2000. As I stepped out of the rushing tide, history swept forward: wireless networks and mobile phones are now everywhere. We routinely hold media-rich communications devices capable of accessing almost all of written history and visual media almost anytime, anywhere.

How interesting and wrenching it has been to step out of that world. My ranch life shares as much in common with prehistoric herders and wine growers as it does with Silicon Valley. I had a re-awakening to the joys and painful burdens of physical life. I changed focus from intangibles to a  vividly tangible life of soil and sun, plant and animal, rain and drought. Our new life features old rhythms that peak with the birth of calves and lambs,  the annual regrowth of the vines, or the pressing of a newly harvested wine. We reach mournful lows with the loss of animals or crops or water sources.  One thing hasn’t really changed from our past lives or from those who preceded us in history: we feel the unrelenting anxiety of pioneering ventures and uncertain outcomes.

When we host wine tastings and ranch tours, a change will often come over our guests. Our scenery evokes a blossoming recognition of the natural world, as if they have re-discovered something. People sometimes tell us about their family’s farm in another part of the world, another time. We speak of homesteaders and ranchos in the old west. The threads of history begin to attach to our guests. The lowing of cattle and braying of sheep are Old Testament familiar, reaching back to the Fertile Crescent and before. “Previous, previous” as Van Morrison sings it. As they sip Rangeland wine,  they see the native artifacts: arrowheads, grinding stones and bowls. These prehistoric tools of sustenance suggest a connection spanning thousands of years, and the web of history gains density. As we look over the ancient hills, we discuss their tectonic formation: the great conveyor of the Pacific plate crushing eastward under our very feet at the astonishingly slow (or fast?) rate of 3 inches per year.  The stones and soil samples we display are old beyond comprehension, but the distinctive, lively minerality of our red wines reveals a sliver of the story. The dark, vivid flavors of our pastured meats offer the same delight and connection.

My family prospered helping to build, in a small way, the future. Of course we still rely on the internet to run our business, pursue our entertainment and connect with the world.  But I am convinced that our future prosperity—and your enjoyment--here on the ranch relies more on an awareness of natural and human history than it does on technical innovation.